Four days of primarily male previews for the upcoming autumn and winter at Milan Fashion Week came to a peaceful conclusion.

With a new collection, Indian designer Dhruv Kapoor, a relative newcomer to Milan, hopes to encourage an inner journey in which he strives to reconcile opposites, whether they be passionate, combative, or contemplative, as a means of healing.

The collection by Kapoor, which blended floral prints to encourage quiet, Godzilla cartoon graphics to indicate violence, and lace accents to represent romanticism, had a message of radical self-acceptance.

The designer promotes accepting all of our parts, especially those that are perceived poorly, with his unisex line called “The Embracer.” Not that he believes wardrobing is the answer.

“The procedure is pretty easy. Say “I love you” to yourself while you look in the mirror. Observe how the magic begins to change. You just need to love who you are, Kapoor remarked behind-the-scenes, adding that he has noticed a significant improvement since starting the practise. “I have no idea how it occurs. I never think about how.

A fitted, torn denim dress with baggy jeans is part of the line. Tight pants with a bell bottom were worn with broad-shouldered suit jackets. Cotton tunics, oversized sweatshirts, and a sheer lace skirt were worn layered underneath. A button-down shirt or form-fitting dress had a raging Godzilla on the front, and a silver pillow jacket featured reptilian spikes on the back.

Godzilla also has a really ominous, horrific aspect about it, according to Kapoor. But he said it shouldn’t prevent acceptance.

According to Kapoor, the crystals on knitwear, suits, and jackets contain energy that can be awakened to improve the wearer’s life. The clothing comes with instructions.

Models moved through the Tiepolo room in the 18th-century Clerici Palace while marching to the beat of modems mixing classical music and hip hop with images of demons. According to Kapoor, the mashup provides “us a smell of the past and the future.” And a new present is being born.

Additionally, Kapoor advocates for environmental healing. Almost two thirds of his collection are either recycled or upcycled, using leftover textiles that would otherwise be thrown away. All of his suit fabrics for this season are created from recycled plastics. 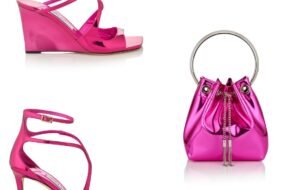 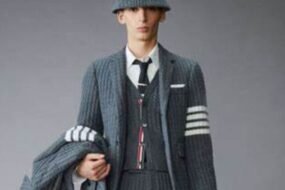