Celebrations galore for Tata Starbucks as the brandmarksits 10th anniversary in India and continues to lead by example with its eminent position in the coffee industry. Announcingthe novel#BrewYourOwnStarbuckscampaign, the brand celebrates its glorious presence in Indiaand strengthens the warm connections it has built with their customers over the years, by offering its customers a-once-in-a-lifetime opportunity to get featured on the Starbucks menu!

Talking about the campaign, Deepa Krishnan, Chief Marketing Officer, Tata Starbucks Pvt Ltd said, “At Starbucks, customers are at the centre of everything we do, and it all starts with their names. As we mark our 10th anniversary in India, we want to celebrate all our customers and the hidden barista in them. Our customers are as passionate about coffee as we are and are full of new ideas and creativity. In this unique campaign, customers are invited to share their own bespoke recipes for a Starbucks beverage and stand a chance to get their names and special beverages featured on the Starbucks menu. This unique first of its kind initiative is our way of thanking our customers and giving them an opportunity to be Starbucks Baristas.”

To further amplify this campaign, this unique campaign has been brought to life with a film, conceptualised and produced by Edelman India in collaboration with The Yellow Umbrella Films. The film highlights TATA Starbucks’ 10-year milestone in India, while giving consumers the unique opportunity to engage with the brand and be a part of its iconic legacy. The filmstarts off with a girl walking into a Starbucks store and requesting that the Barista make a beverage for her which is her unique recipe. As she goes on to explain her recipe, the store surprises her by putting it up on the menu board as – Naina’s Decadent Frappuccino! The barista shares that Starbucks is celebrating their 10th anniversary by applauding the barista in you leaving her pleasantly surprised and overjoyed by this gesture. The film calls out customers to join this one-of-a-kind campaign by sending beverage ideas that are uniquelytheirs and standing a chance to be featured on Starbucks menus. Bringing you an incredible December to remember is R CITY, Mumbai. 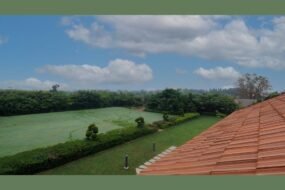