In order to increase the competitiveness of garment exports globally, AEPC launched its emphasis on
sustainability and circularity in an effort to make the textiles industry more effective and less polluting. A brainstorming session on “Promoting Circularity among the Indian Garment Industry” was organised by AEPC as part of one such initiative. For this project, AEPC has teamed up with Fashion for Goods, a
Dutch company.

Participating in the session were companies and retailers such as PVH, adidas, LS&Co, TESCO, Target,
Primark, Arvind, Birla Cellulose, Welspun India Reverse Resources, Matoha, and Picvisa. The government is prepared to assist the industry with incentives, pertinent interventions, standardisation, and policy support to develop a viable ecosystem for a sustainable and circular economy, according to UP Singh, secretary of textiles. Chairman of the AEPC Naren Goenka stated: “Roughly 50% of 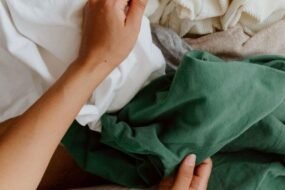 FASHION FOR GOOD SORTING FOR CIRCULARITY ADVANCES INTO THE US MARKET AT 080 BARCELONA FASHION, QUALITY AND SUSTAINABILITY ARE PRIORITISED.